We sent out our July 2018 news update in Makuyuni just recently. Traveling to Tanzania as a group of 7 in April, our team built a latrine, the base of the dormitory and built so many relationships! Attached is the July newsletter of the progression we've made in Makuyuni, Tanzania, Africa.

Transitioning to a better Future

The first time we met the Mamas in 2012,  I knew they were very strong and resourceful women.  They were sitting on the ground working intently and creating beautiful pieces of jewelry from tiny, tiny beads.  We learned that they depended on sales of their art to feed their children.

They ran to meet us when we drove up.  What a joy and an honour it was to spend some time with them and support them by bringing home some of their beautiful beadwork!  Once Nashipay School was built, we proceeded to raise money to build a retail gift shop and workshop, Bead by Bead, which opened its doors in 2014.

Now, in 2016, Bead by Bead is home for the Mamas' business,  and does it look good!!  We shopped for pieces to bring home with us to sell at various fundraising events in Canada and you can see by the smile that everyone was happy!!  A good retail day at Bead by Bead😊

Trip of a Life Time

In January 2016 I and another friend took a group of volunteers to build a classroom on Maasai Land in Tanzania Africa.  Part of Masaai Friends 4Good project.

I group of volunteers paid $500.00 ( tax deductible)  each and we used this money to buy all the building materials. It was so hot, but the enthusiasm was high. We sang, laughed, danced and connected with our Massai family at a  deep heart level and  8 days later we had a classroom built that would educate 40 children.

What an enormous, life changing opportunity this was for all the volunteers. Each person was so changed by this experience and many moved to tears by the connections that they made during this voluntourism opportunity.

We were elated by the end result and knowing that our labour would have such a positive effect on this community that has been struggling for so long. Education is always the key to moving past poverty and we know that this will make a difference in the lives of our Maasai families from Makuyni village.

Check out the video:

Looking at all that has been accomplished since our first visit in 2012, I am humbled!! We were so inspired by meeting Clamian, meeting the Mamas, our safari and the beautiful people, animals and landscapes of Tanzania that I came home knowing that this trip was so much more than ticking one more item off my "bucket list."  I had to go back! I wanted to help in some way and we had the support of our Spiritual Community, The Centre for Inspired Living in Victoria, BC.  None of this would have gotten off the ground without their unconditional support.

We started by asking the Maasai, through our friend Clamian, how we could help them.  It took a couple of weeks for them to discuss this, because needs are great and resources non existent; there were big choices to be made.  They considered a medical clinic, water and a school -- all basic services that we take for granted but missing in the lives of these people.  They decided that education for their children was their #1 priority.  This was a goal that was totally in alignment for our Victoria group and we overwhelmingly agreed to help them. This was a Maasai community driven project right from the beginning! 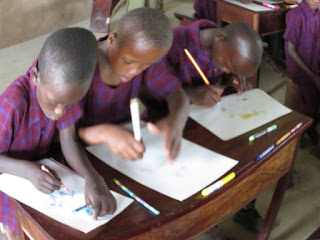 The first thing the Maasai village asked for was a brick maker.  We raised $1200, they bought the brick maker and started making bricks for the first school classroom in late 2012.  We held 2 more fundraising events and raised enough money to build the small school.  In May of 2013 a group of 14 people from the Centre went to Tanzania to join the Maasai in "Raising the Roof" on the school.  It was life changing for the Maasai people and for us!!  One of the participants from this first group raised money and led an initiative to pipe water about 5km to the community -- a game-changer!  Another participant built a retail shop for the Mamas to sell their beautiful beadwork.  Two more women from our group were instrumental in introducing Friends4Good to our village and two more classrooms were built, one of them by a group of volunteers from Victoria -- in 8 days!!!  The mamas now have a second business; a sewing shop.  Friends4Good generously donated money to start a pig farm, which now has over 40 pigs and will support the operation of the school by 2018. 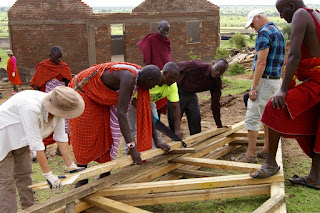 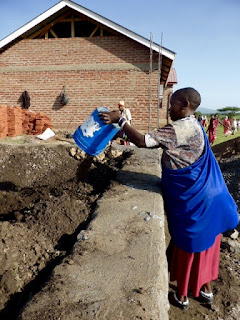 What's down the road?  It's mind boggling to me sometimes.  I Skype with Clamian about once a week; sows are birthing piglets, he's looking at a "poop to power" project to process the pig manure, the farm is being considered as a model farm for the region, water lines are being extended within the village.  They need to build roads, acquire solar panels, build more classrooms, hire new teachers and enrol new students. Maasai adults are learning new skills and being employed right in their own village.  So much to do -- I wish I were independently wealthy, so we could just move forward!  But I know we will find a way -- we always do!
Posted by Karen at 4:58 PM No comments:
Email ThisBlogThis!Share to TwitterShare to FacebookShare to Pinterest
Labels: Africa, children, economic development, Education, school, Tanzania, water